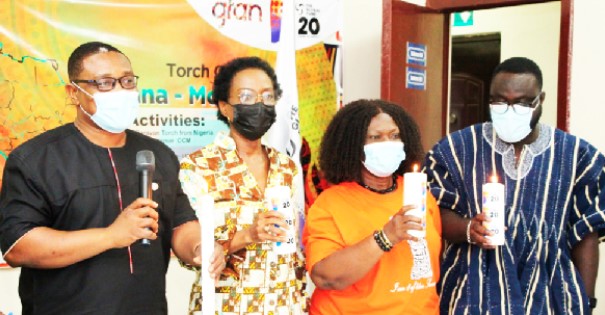 Since its inception in 2002, the Global Fund has invested more than $50 billion in 155 nations and regional programs to combat tuberculosis (TB) malaria, and HIV making it one of the world’s top donors of global health. The fund has contributed nearly $1 billion to the fight against the three diseases in Ghana, while also assisting in the strengthening of health systems in 155 nations.

From October 22 to November 6, 2021, the event will be commemorated with a variety of activities, such as soccer and aquatic events. The event will also serve to chronicle and amplify civil society and community opinions to reflect on the global fund’s course, what the collaboration means to developing nations, and what global leaders must do to maximize its benefit.

More than $4 billion is raised and invested annually by the global fund to support programs operated by local specialists in more than 100 countries. Mrs. Angela Trenton-Mbonde, UNAIDS Country Director in Ghana, welcomed the virtual torch caravan and said the global financial agency’s aim, as embodied by former UN Secretary-General Mr. Kofi Annan, was broad and ambitious.

Through the worldwide fund, Mr. Annan’s legacy has helped save millions of lives and changed the path of the HIV response in Ghana, she added. Dr. Stephen Ayisi Addo, the National AIDS/Sexually Transmitted Infection Control Programme’s Program Manager, said Ghana had been a big recipient of the money, with over 226,000 patients receiving AIDS treatment as a result of it.

He claimed that the investment had resulted in a growth in the country’s human resources in terms of numbers, quality, and capability as well as an improvement in the healthcare system’s infrastructure foundation. Dr. Keziah Malm, the National Malaria Control Programme’s Program Manager, said the fund has aided the government in scaling up to the requisite interventions in malaria control.

She went on to explain that the fund had been a big help in the country’s fight against malaria, mentioning support for indoor residual spraying in three regions, intermittent preventative treatment for pregnant women, insecticide-treated net distribution, and malaria care in hospitals as instances. The global fund was established at a period when the world’s deadliest epidemics, AIDS, TB, and malaria, appeared unstoppable, claiming millions of lives and wreaking havoc on families and communities all over the world, particularly in poor countries.

The fund was formed in 2001, and it has changed the path of global health by bringing together world leaders, the private sector, communities, health workers, and civil society to fight AIDS, tuberculosis, and malaria. The fund is a collaborative effort aimed at bringing the three diseases to an end as soon as possible. The fund has saved 44 million lives and provided preventative, treatment, and care services to hundreds of millions of people as a result of its work.