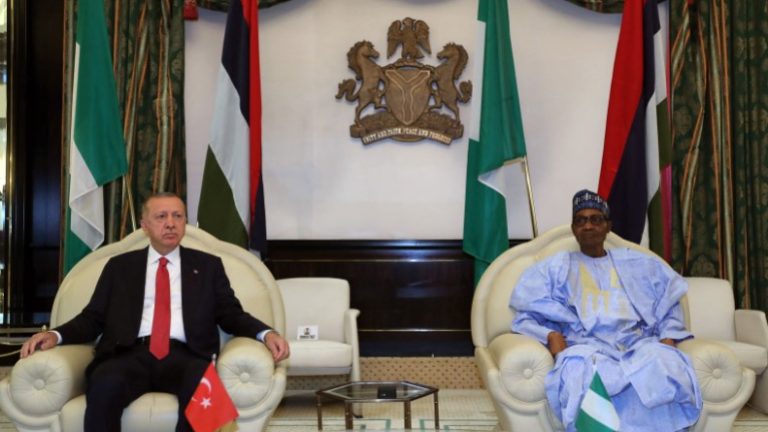 President Recep Tayyip Erdogan said Wednesday in Abuja, Nigeria’s capital, that Turkey and Nigeria are resolved to enhance their cooperation and partnership. Erdogan was in Nigeria as part of a three-country mini-tour that also included visits to Angola and Togo.

The president also emphasized the significance of working together to combat terrorism. Erdogan was greeted with a formal ceremony at Aso Rock, Nigeria’s presidential palace, by his Nigerian counterpart Muhammadu Buhari.

The two presidents held a joint press conference after one-on-one conversations and delegation meetings, according to Erdogan, to discuss bilateral relations and future cooperation. The struggle against the Gülenist Terror Group (FET), the group behind Turkey’s failed coup attempt in 2016, was also emphasized during the Turkish president’s visit.

This includes a proposal for the Turkish Maarif Foundation to take over FET schools that are still operating in various locations of Nigeria.

“We continue to communicate critical information with Nigerian authorities concerning FETO’s criminal actions in the country,” Erdogan stated. Erdogan also stated that Turkey has been closely monitoring events in Nigeria and that Turkey can assist Nigeria in its fight against terrorism, emphasizing the significance of a united front in this endeavor.

During the visit, seven agreements in the domains of hydrocarbons, mining, and energy were also signed. With a trading volume of $754 million (TL 7.03 billion) in 2020 and an estimate of more than $1 billion by 2025, Nigeria is Turkey’s most important commercial partner in Sub-Saharan Africa.

Erdogan had already visited Nigeria in March 2016, and in October 2017 he hosted President Buhari at the Presidential Complex. Erdogan told Nigeria’s president that Turkey was ready to grab any opportunity to maximize the two countries’ economic connections’ true potential.

Three Telcos have qualified for the 5G auction, according to the NCC.

After ten-months, Emirates Airlines has resumed service in Nigeria.