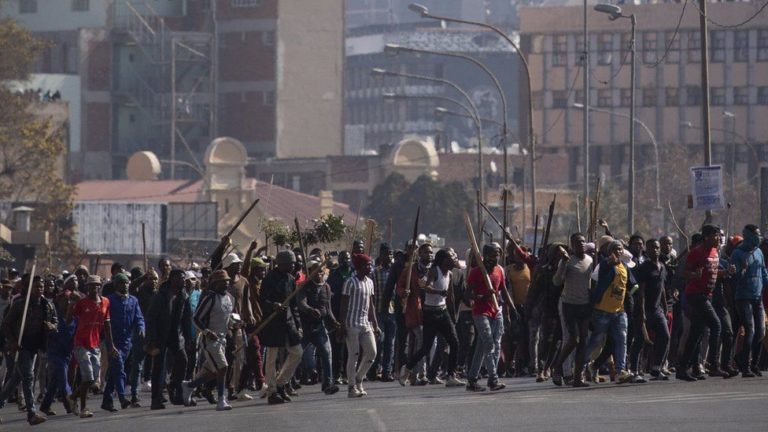 Protests broke out in at least two provinces, KwaZulu-Natal and Gauteng, on the 4th July, although it stemmed from the imprisonment of former President Jacob Zuma, it has now escalated into stealing and wide-scale looting. Journalists who spoke with CPJ confirmed that demonstrators and looters attacked at least four community radio stations at night and during the day. They have robbed and assaulted journalists reporting the commotion over the past ten days.

According to the Committee to Protect Journalists, South African authorities must investigate new attacks on media houses and the journalists covering the country’s social unrest. “The rioting and civil unrest in South Africa is the country’s biggest news story, and the media must be free to cover it without fear of assault so the public can remain informed at such a crucial time,” said Angela Quintal, CPJ’s Africa program coordinator, in New York.

“Even while they are engaged in stopping rioting and looting, law enforcement agencies cannot turn a blind eye to how journalists are being attacked and threatened while doing their jobs, and must ensure that those who do so are held to account.”

The attackers destroyed the station premises, according to Alex FM station manager Takalane Nemangowe, who told the CPJ through messaging app that they had stripped the radio station of everything and what remained were just papers. He said that a broadcaster and a security guard who happened to be in the premises during the attack managed to escape unhurt.

Nemangowe went on to say that a fan in Alexandra had volunteered his home for the station’s use and that he hoped the station would be back on the air the next day. According to a statement from the outlet, obtained by CPJ, and press sources, unknown perpetrators destroyed Mams Radio’s transmitter, studios, and offices, as well as stealing equipment from the station. The station announced that they will be off-air till further notice and that the attack was being investigated by authorities.

Looters had damaged the doors and windows of West Side FM’s office and stolen broadcasting equipment which included computers, according to CEO Good hope Ledwaba. Intokozo FM uploaded images of destruction that took place in its studio on their Facebook page; the station, which usually broadcasts live on Facebook, has not updated its page since uploading those photos.

On the other hand, on July 3, a member of the ruling African National Congress Party’s Umkhonto we Sizwe Military Veterans’ Association interrupted Samkele Maseko, a political reporter for the public broadcaster SABC, while he was broadcasting coverage of a rally in support of former President Jacob Zuma, according to news reports, video of that broadcast, and other sources. In the video, an unidentified man putting on camouflage is seen blocking and throwing the camera that was shooting Maseko’s broadcast to the ground.

Reports have it that Edward Zuma, the former president’s eldest son had initially threatened to set fire to one of the 24-hour news channel eNCA’s cars parked outside his father’s house. According to those reports and the forum’s statement, an unidentified Zuma fan attacked Maseko in the process of reporting news outside Zuma’s abode the next day.

According to those reports, the attacker slapped Maseko and tried to choke him, accusing him of betrayal and said he tried to ruin African National Congress party leaders. According to the forum statement, Sbu Galva, the chairperson of the editors’ forum, intervened and rescued Maseko.

Unfortunately, media houses were not the only ones affected by the rampage, small businesses within the stated provinces also suffered immense losses. Many have taken to Twitter to bemoan their loss of livelihood amidst the unrest in the country. Brigadier Vish Naidoo, the national police spokesperson, did not respond to several requests for comment received by CPJ via messaging app. Every incident would be reviewed and dealt with on its own merits, he said News on 24.