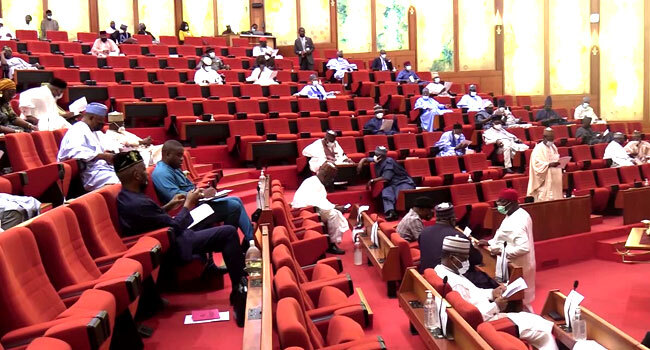 The Senate’s Committee on the Interior has been asked to launch an investigation into the facts surrounding the country’s ongoing jailbreaks.
According to the legislators, this will also hinder future jailbreaks.
During the plenary on Tuesday, the MPs requested that the committee invite the Minister of Interior, the Comptroller General of the Nigeria Detention Service (NCOs), and the Attorney General of the Federation to discuss the state of prisons around the country.
After Senator Istifanus Gyang, a Federal Lawmaker, brought the attack on two communities in the Bassa Local Government Area of Plateau State on a correctional centre in Jos, Plateau State, to the attention of legislators, the Senate directed its committee on actions to take.
Senator Gyang described the attack as a blow to Plateau North’s relative tranquillity, and he urged for a more effective reinforcement and security management system to stop attacks at correctional facilities throughout the country.
Several inmates are currently on the run as a result of the country’s ongoing jailbreaks.
Rauf Aregbesola, Nigeria’s Minister of Interior, claimed earlier this month that over 3,000 inmates have escaped from prison in the last year.
From 2020 until the present, 4,860 inmates have fled from various detention camps, according to Aregbesola, who revealed this during a press conference at the State House in Abuja. Of these, 984 have been caught.
As a result, there are around 3876 convicts who are no longer in custody across the country.
According to Aregbesola, fingerprints of all inmates in the country have been collected, and the Federal Government thinks that this effort would aid in the tracking and recapture of the fugitives.

The order for Covid vaccine in Kenya has been suspended by the Kenyan court.Gunmen attack Plateau Village, killing nine and injuring four.Chimano, Sauti Sol singer applauded in Kenya for coming out as gay.Sterling Bank receives approval from the CBN to restructure as a holding company and start a non-interest bank.South Sudan violence could lead to war crimes – AmnestyConcern as Mali’s hunger has tripled in the last yearCovid: Pfizer booster injection against Omicron is promising.Human rights violators go unpunished- Amnesty.Ethiopia’s Prime Minister back to the office from front line.Police in Malawi apprehended a former minister and Bank chief for lying to IMF.
January 12, 2022