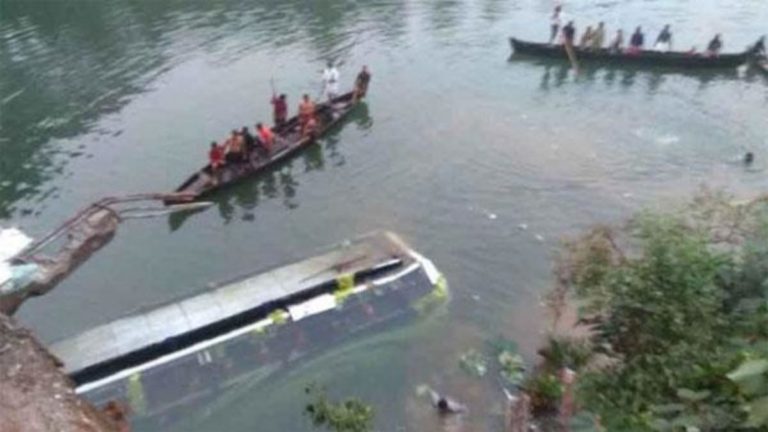 When a Toyota Hiace Bus fell into the Ososa River in Ogun State, two people died and eight others were injured in various ways. The accident happened near J4 Ogbere on the Benin – Ore Expressway in Ogun State’s Odogbolu Local Government Area. Florence Okpe, the Federal Road Safety Corps’ Public Education Officer for the Ogun Sector Command, said this in a statement on Monday. Okpe said the accident happened about 9.30 p.m. on Sunday after a brake failure caused the car to lose control and crash into the river. She stated that two vehicles with the registration number APP86 7XZ, a Toyota Hiace Bus, and a truck with the registration number KJA376 XN were involved in the fatal incident. According to Okpe, a total of ten people were engaged in the collision, with five male adults and five female adults among them. She said, “Eight people were injured and this comprised three male adults and five female Adults. Unfortunately, two deaths were recorded from the crash. “The suspected cause was speed which led to the loss of control “The Injured victims were taken to the state General Hospital Ijebu-Ode while the dead were deposited at the morgue. “The Sector Commander, FRSC Ogun Sector Command caution motorists on excessive speed especially at night when visibility is poor. “He also commiserated with the family and ask them to contact FRSC Ogbere Outpost for more information.”

In Mbarara, two persons were killed in an explosion at the Agip Motel.

Subsidies must be removed for Nigeria’s economy to survive — Muda YusufIn Mbarara, two persons were killed in an explosion at the Agip Motel.At Abuja Airport, the NDLEA intercepts cocaine worth N2.7 billion.EFCC Places Anambra Governor, Willie Obiano On Watchlist.A new Covid-19 variant has been discovered in South Africa, according to the institute.The National Labour Council opposes the projected increase in gasoline prices.Another 330 Nigerians are being evacuated from Libya by the International Organization for Migration and the Federal Government.President Buhari preside over a virtual meeting of the Federal Executive Council.Secondary school kids and other kidnapped victims are rescued by Zamfara police.COVID-19 got a N2.3 trillion stimulus package — FG
December 1, 2021