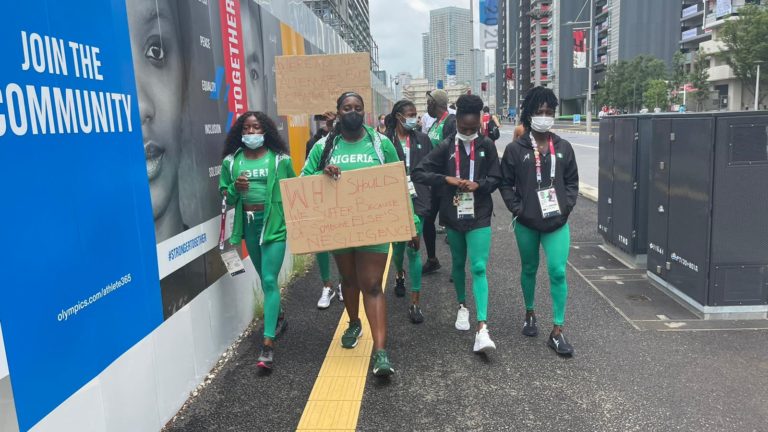 It’s mixed blessings for team Nigeria at the Tokyo Olympics following the disqualification of about half of the country’s track and field as athletics began today.

While some of those cleared to compete made progress in their events, the 10 who were disqualified for falling short of anti-doping requirements, took to the streets of Tokyo to protest against their own officials, some others aired their grievances on social media.

One read: “All we wanted to do was to compete”, another read “why should we suffer because of someone else’s negligence.”

And another rea: “We are not just alternates but potential medalists”.

Nigeria’s number one table tennis player, Aruna Quadri, aired what was critical of the team Nigeria officials in a series of posts on Instagram.

One of his posts read: “When you talk you are rude. Cheating is always normal to them.

“No single respect for athletes. Priority is never put on athletes some of you caught red-handed in previous games.”

In another post, he queried the sacking of his coach.

Meanwhile, Nigeria’s representatives in the women’s 100m sprint made progress in the event.

Commonwealth and African record-holders, Blessing Okagbare, and Grace Nwokocha are qualified for the semi-finals of the event.

Okagbare cruised into the semi-final in the first position returning in 11.05 seconds in the sixth heat while National Champion, Grace Nwokocha placed 3rd with a personal best of 11.00 seconds in heat five.

The semi-finals of the women’s 100 metres will take place at 11 am Nigerian time on Saturday.