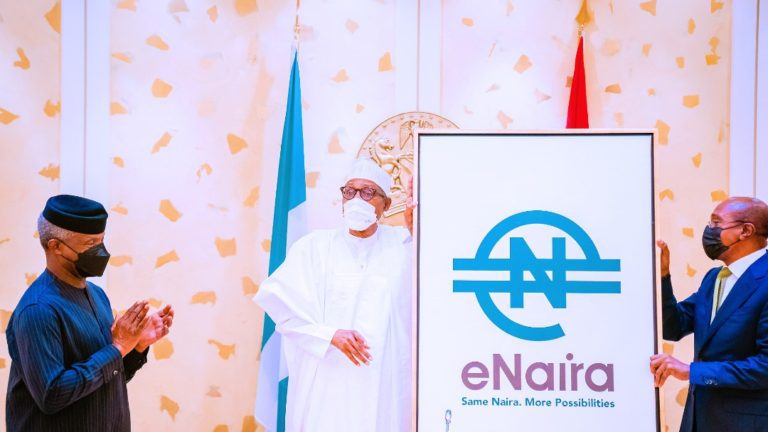 President Muhammadu Buhari says the adoption of the Central Bank Digital Currency, CBDC, and its underlying technology called blockchain can increase Nigeria’s GDP by $29billion over the next 10 years.

Buhari said this Monday in Abuja at the official launch of the eNaira.

The President also declared that the introduction of the eNaira would enable the government to send direct payments to citizens eligible for specific welfare programmes as well as foster cross border trade.

The President said with the launch of eNaira, Nigeria has become the first country in Africa, and one of the first in the world to introduce Digital Currency to her citizens.

He commended the Governor of the Central Bank, Godwin Emefiele, his deputies, and the entire team of staff who worked tirelessly to make the launch of Africa’s first digital currency a reality.

The President, who assured Nigerians of the safety and scalability of the CBDC system, said the journey to create a digital currency for Nigeria began sometime in 2017.

The President also used the occasion of the unveiling of the eNaira to painstakingly explain to Nigerians why he approved the use of the digital currency.

Equally, the Nigerian leader noted that his approval was also underpinned by the fact that the CBN has been a leading innovator ‘‘in the form of money they produce, and in the payment services they deploy for efficient transactions.’

He noted that Nigeria’s apex bank has invested heavily in creating a payment system that is ranked in the top 10 in the world and certainly the best in Africa.

In his remarks, the CBN Governor explained that eNaira is Nigeria’s CBDC and it is the digital equivalent of the physical Naira.

Emefiele hinted that the CBN has given careful consideration to the entire payments and financial architecture and has designed the eNaira to complement and strengthen these ecosystems and has implemented security safeguards and policies to maintain the integrity of the financial system.

He pledged that there would be strict adherence to the anti-money laundering and combating the financing of terrorism (AML/CFT) standards in order to preserve the integrity and stability of Nigeria’s payment system.

According to Emefiele, since the eNaira platform went live, there has been overwhelming interest and encouraging response from Nigerians and other parties across the world with over 2.5 million daily visits to the website.

He listed the following milestones:

The CBN Governor also used the occasion to commend President Buhari for making history, yet again, with the launch of the eNaira – the first in Africa and one of the earliest around the world.

He also dispelled fears on the nation’s foreign reserves, saying the reserves are strong and getting stronger by the day.

In addition to all policies and actions of the CBN to support the economy especially through the trying times of COVID-19, Emefiele announced a new financial instrument titled “The 100 for 100 PPP – Policy on Production and Productivity”, which will be anchored in the Development Finance Department under his direct supervision.

He explained that under this policy, the CBN would advertise, screen, scrutinize, and financially support 100 targeted private sector companies in 100 days, beginning from November 1, 2021, and rolling over every 100 days with a new set of 100 companies, whose names will be published in National Dailies for Nigerians to verify and confirm.